Food security is an issue near and dear to my heart.  Although I live in Canada, not all our citizens have access to sufficient, safe and nutritious food to maintain a healthy and active life at all times.

Food security is not just a poverty issue. It is a much larger issue that involves the whole food system and affects everyone in some way.

As consumers, do we think about what is in the food we buy? How it is grown? Who is involved in growing it?  Where the food comes from? Who can afford it?

Can we support local, small-scale farmers who produce food in sustainable ways?

Can local, small-scale farming feed a projected world population of 9 Billion people by 2050?

It is a myth that world hunger is due to scarcity of food. We need to rethink how we are going to feed the human race.

“The existence of food security insecurity in a wealthy country like Canada is not accidental. It is the result of policies created by different government sectors, including social, agricultural, economic, and health. For example, in the social policy sector, food insecurity is created by both reduction in social assistance rates and restrictive eligibility criteria.” ~ Laura Kalina, R.D.N. M. Ad. Ed. Building Food Security in Canada: From Hunger to Sustainable Food Systems: A Community Guide (2002)

I just finished reading Invisible North: The Search for Answers on a Troubled Reserve

by Alexandra Shimo, published in 2016

This book is about the ‘fourth world’ conditions that exist on many Aboriginal reserves in the Canadian North. Alexandra is a journalist and former MacLean’s Magazine editor who visited the Kashechewan Reserve in Northern Ontario to report on a water crisis. She walked away a changed woman and with a real story to tell. As Alexandra Shimo lays out in her book, food security and racialized poverty are major issues.

She demonstrates how high level political and economic policies play out in the daily lives of aboriginal people. Alexandra’s book gives a hard and honest look at the disparity that exists and the barriers (historic, political, social, economic) faced by aboriginal people almost every step of the way.

This book is a fascinating and sobering read from start to finish. Alexandra skillfully wove her personal experience and journalistic hunt for the truth about e.coli water contamination with the harsh reality of daily life, politics, food security and the arm’s length control by Ottawa.

The following is an excerpt from Invisible North: The Search for Answers on a Troubled Reserve

“At the fruit and veggie section, a bunch of grapes (seventy-nine grams or about one hundred grapes) costs $13.42, a bag of apples (three pounds of golden delicious) is $15.29, and a single head of red cabbage is $12.89. The prices don’t reflect the quality: the veggies are dry or browning, and some of the meat is pat its sell-by date…Mostly I’ve bought mac and cheese, pasta , and tuna fish…I stand nervously at the checkout and nervously watch the numbers spiral upward. My first grocery bill comes to $342.57…Fuck, I think. How do people survive on the $383 monthly welfare?” ~ Alexandra Shimo 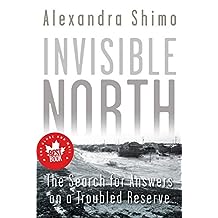 Invisible North: The Search for Answers on a Troubled Reserve